I published the article “Videogiochi, lingue straniere e didattica ai tempi del COVID-19 (Video Games, Foreign Languages and Teaching in the Time of COVID-19” in Griseldaonline, the Journal of Experimental Literature Review dedicated to didactic training and computer models applied to the Human Sciences of the University of Bologna. The article, in Italian, is available at:

The article, written on April 7, was published yesterday, April 10. I feel honored that I could contribute to the cluster of articles written by Italian and American professors on responses to, and strategies and responses to, the current COVID-19 crisis.

My three short chapters for LEG BOOK 3 were published on November 20, 2019!

The volume “Learning Education & Games – Vol. 3 – 100 Games to Use in the Classroom & Beyond”,  a guide for educators, parents, researchers, designers, written by members of the @IGDA, @LearningEdGames, SIG, #edgames #igda, @etcpress, @IGDANYC, #teachers, #educators is available in print version and as a free download at http://press.etc.cmu.edu/index.php/product/learning-education-games-volume-3/.

I wrote on The Invisible Hours and Rise of the Tomb Raider and a co-authored a chapter on the Assassin’s Creed series.

Award-Winning ITAL 1200 – Intensive Italian for Gamers will be offered at Saint Louis University in spring 2020!

Glad to have met such a dynamic group of dedicated high-school foreign language teachers! Their students in Italian, French, Spanish, Russian, Classics and Chinese receive SLU credits. My presentation, “Video game-based learning in the high-school classroom?” was very well received.

On a related note, today I was asked and accepted to serve on the SLU Esports Advisory Committee. Looking forward to spearheading the educational value of Esports at my institution.

The Discovery Tour Mode released today for Assassin’s Creed Odyssey is a fantastic addition to an already excellent game. I am very excited about its release, particularly because I am currently developing a video game-based learning / digital media learning “Intro to the Classical Humanities” course with my colleague in the Classics program, Dr. Joan Hart-Hasler.

I studied Classics for most of my life (12 years of Latin coursework, 10 years of Greek). I fell in love with the Greco-Roman civilization by the time I was 14. I was very impressed with the re-construction of Hellenistic Alexandria in Assassin’s Creed Origins, its history, monuments, everyday life and even the use of Koine Greek by non-playable characters (NPC). The lexicon and pronunciation of the ancient common language of the Greek empire has been carefully, effectively and convincingly re-constructed. Now, I cannot wait to explore their tour of Classical Greece and re-construction of the language, life and culture, and explore its pedagogical uses in our college course. “Intro to the Classical Humanities’ will be taught in English, as a large first-year experience course. Besides video game-based learning, I plan to include graphic novels and other digital media. I hope to present it to the undergraduate course committee sometime this fall, and teach it next spring.

What is most exciting about the inclusion of the Discovery Tour, in my opinion, is that it makes digital game-based learning/quest-based learning accessible to high-school and, in some cases, even middle school students. In fact, it is a “pacific” mode, devoid of violence.

Thank you ISI Florence and The Umbra Institute. My new article on video game-based learning, (Digital) Narrow Streets of Cobblestone: Game-Based Learning as a Preparatory Device & Simulation Strategies for Study Abroad Programs, appeared today on the new issue of Beyond – The ISI Florence & Umbra Institute Journal of International Education:

Abstract
For decades now, video games have been a pervasive part of our culture (NBCNews.com, 2013). About half of all American adults play video games (Duggan,
2015), while 97% of teen boys and 83% of teen girls also play video games
(Anderson & Jiang, 2018).
The potential for utilizing gaming in learning has been explored in a variety of
fields, including language acquisition (e.g., Reinders, 2012). Some commercially available cinematic video games are fully-interactive multimedia experiences. Thus, including such games in the curriculum as realia (Spurr, 1942; Dlaska, 2003) can help students reinforce, and expand upon, materials they learn through traditional methods. Realia reinforce second/foreign language (F/L2) acquisition through development of specific personal interests. Cinematic games, similar in nature to movies, also add agency, which improves learning (Deters et al., 2014). They also involve problem-solving and critical thinking that can be applied to group interaction, all of which is particularly conducive to learning (Wenger, 1998) and F/L2 acquisition (Nunan, 1992). Video games can
contribute to the goal of transforming our students into life-long learners of (a)
F/L2 language(s), a process explored by CALL (e.g., Smith, 1997).
This article is a case study on teaching practices with video game-based learning, its benefits in the foreign language classroom and, in a more general sense,
in second/foreign language & culture acquisition (F/L2). I argue that utilizing
video games as part of F/L2 experiences, including in the different phases of
the study abroad experience (pre-departure, during the program, and post-departure), can enhance the learning of F/L2 language and culture. Video games
are simulations that challenge, based on repetition, which involve players at a
deep level, thus affording agency. In recent cinematic “AAA” commercial video
game titles, the simulation aspect engages players in a dialogue-based, narrative context that can prepare students for real-life conversations. The article
also serves as a practicum, by providing suggestions on how to use commercial video games to enhance language & culture acquisition as part of independent, autonomous students’ learning that educators and administrators
can foster, structured learning experiences such as study abroad (including
pre- and post-departure), and courses.

I will be in Asti, Italy from May 23 through August 20, doing research on video game-based learning, finishing up my book on intertextual imitatio/aemulatio in Dante’s Divine Comedy, and delivering talks and workshops.

I will be in Barcelona from May 30th through June 4th, and on holiday in Southern France from July 20th through August 4th.

Please see the workshop and lecture section of my portfolio here on my blog for more information about my lecture and workshop formats. 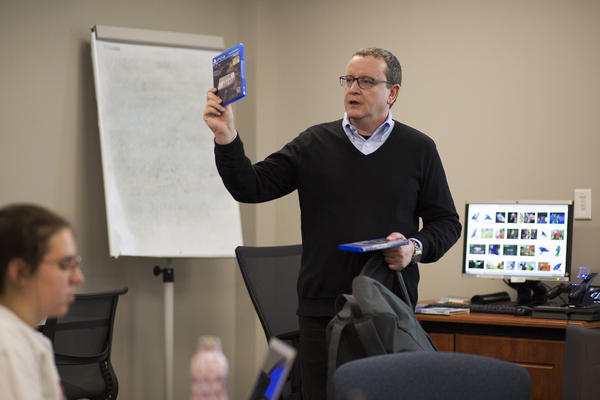 Grazie/Thank you St. Louis Public Radio for your interview! The interview was broadcast today, April 17, 2019, and it is available at the following link:

On Friday, March 15, 2019, I presented in the roundtable session “Gamification and (Video) Game-Based Learning in the Second/Foreign Language Classroom” at the American Association of Italian Studies Conference at Wake Forest University in Winston-Salem, NC with fellow Italianists Prof. Camilla Zamboni, Wesleyan University and Dr. Brandon Essary, Elon University. Prof. Zamboni talked about analog “AAA” games, board games and RPG’s, while Dr. Essary and I shared our developments on using “AAA” video game titles.
The session was very well attended and we received very positive feedback.

Grazie/Thank you National Museum of Language for your interview! The interview was published on 3/19:

I talk about my passion for language learning, video game-based learning with “AAA” titles and my methodology (Identify, Acquire, Create), my research and teaching practices at Saint Louis University, Intensive Italian for Gamers, Assassin’s Creed and Sega’s Shenmue as the best game to learn Japanese language and culture.

On Wednesday, March 6, 2019, I presented in the session “Can AAA Games Be Used to Improve Education?” at the SXSW EDU Conference in Austin, TX. The session was organized by Maxime Durand, Ubisoft’s historian in charge of the Assassin’s Creed series.
The session was very well received, with a lively Q&A session at the end, and very positive feedback.

Playing videogames has become an integral part of mankind’s cultural habits. A huge gap still divides “AAA” entertainment games (such as Assassin’s Creed) from “serious’’ games (games created by educators for specific educational purposes) in terms of appeal and defined learning objectives. Using data and sharing their own in-class experience, the panelists discussed how AAA games can help advance learning (formal and informal) for students at all stages of their education, from grade school to college.

It was a pleasure to present with Maxime Durand and Brian Stottlemyer, and I look forward to collaborating with them in the future.

Thank you Maxime Durand @TriFreako and @Ubisoft for a great professional opportunity!